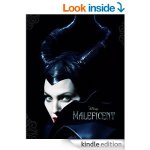 My intention is to review Caribbean books and films, however, I went to the movies last night for the first time in a long time, so I will break my stride a bit and write about it. Maleficent was enjoyable. People clapped at the end. As I mentioned, it has been a while for me, so I am not sure if that is a new phenomenon among American movie-goers or if they felt that it was really that good.

This is not the Sleeping Beauty tale you may have heard as a child. It was a heart warming tale of true love, but not the sort of true love you might expect. Angelina Jolie played a believable and loveable villain.

Aurora? Well, we have to forgive her general cluelessness, she was, after all, enchanted and raised by fairies, and she redeems herself near the end.

I’m not sure what excuses can be made for the King, the true villain. I don’t think the fault was entirely with the actor, I felt that the writers needed to have spent a day or two more tweaking his character unless the intention was to suggest that humans are generally raving lunatics intent on destroying everything beautiful.

All in all, an interesting film with themes of love and forgiveness that will provide some fodder for discussion with the kids afterwards.