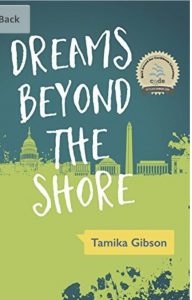 At its heart this is a coming-of-age love story. Told from two perspectives, Chelsea’s and Kyron’s-her eighteen year old boyfriend, the story is real and the central characters’ voices ring true to the electric experience of new teenage love. Kyron steals the show with his good looks, confidence, intelligence, and integrity all mixed in with a slight bad-boy vibe.

Dreams Beyond the Shore is set on the twin island republic of Trinidad and Tobago, and while the setting is important, it remains in the background leaving at the forefront the classic tale of two teens struggling to define life on their own terms. Teen readers will definitely connect to their stories

While the central story line is well written and developed, readers may find themselves wanting to know more about the underlying stories of Mr. Marchand’s connection to the criminal world and the implications of his rise to being Prime Minister, both for the country and for Chelsea and Kyron.

There is an interesting cast of secondary characters who do have some depth but are unsatisfying in that their appearances are fleeting.
During her narrative, Chelsea hints repeatedly at her father being duplicitous and corrupt but we don’t see hard evidence of this. Near the end there is a strong suggestion that Mr. Marchand has been involved in horrible crimes however it is hard to believe that these are the sort of activities of which Chelsea was aware.

This is an enjoyable book. I became invested in the lives of the main characters and was left wanting at the end as I needed to know more about their fates.