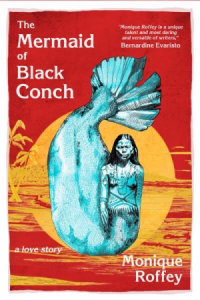 It’s 2015 and we meet David Baptiste, his “dreads…grey and his body wizened to twigs of hard black coral.” He is a fisherman on St Constance, a tiny Caribbean village on the island of Black Conch, who had been the center of “the events of 1976” when a mermaid came to shore on the island and challenged the hearts and ideals of the villagers. Through a combination of points-of-view: deeply-introspective entries from David’s diary entries; haunting poems from Aycayia, the mermaid; and a third person narrative, Roffey throws us into the world of Black Conch where the people must decide what to do with the discovery that mermaids actually exist.

At first Aycayia is David’s secret. She is attracted to the sound of his guitar and they flirt silently. She has “fonny” eyes which are “too bright,” make her irresistible and leave men “nursing a tabanca” when she’s not around. Hundreds of years before, this attraction led to her being hated and then cursed to a life in the sea by the women in her original home.

One day, Aycayia mistakes another boat for David’s; a charter boat commissioned by two white American men. Aycayia gets caught in a struggle of man against beast (she’s as “strong as six men”) reminiscent of Hemingway’s Old Man and the Sea except, as Roffey takes pains to point out, there is no mutual respect between the combatants and these men are breaking the rule of the sea: “Take only what you need.”

Word of her capture reaches David who rescues her and their relationship unfolds slowly and tentatively into a deep love. David aches for her, but is mature enough to recognize that “a man have to wait for his bride. He have to wait quiet quiet for her to pick him.” He does just that, and is duly rewarded. The Mermaid of Black Conch is a love story twice over because we also meet Miss Arcadia Rain, a white local woman with her own story of heartbreak, having been jilted by her first and only lover, Life, ten years before. We do have an opportunity to meet Life, and his vitality leaps off of the page in a way that makes it obvious why Arcadia finds it difficult to move on.

I must admit I was concerned when Arcadia entered the tale, a white sheriff of sorts introduced after a scene in which the locals had been portrayed as drunken and crazed buffoons, however I persisted. Aycayia echoes my concern when she eyes Arcadia with distrust. “The woman was white, dappled with freckles, and no matter what she wasn’t, she was of the type who had wiped her people out.” Arcadia turns out to be an important character who allows the author to address race relations and the legacy of colonization on the island. Her story is also important in highlighting the theme of belonging.

The Mermaid of Black Conch follows the format of many tales like E.T. (for my older readers) and The Shape of Water (for the slightly younger ones) where an alien comes into contact with humans, develops an asymmetrical relationship with a lonely individual, and conflict ensues about which life is valuable and worthy of freedom instead of possession. In this case, the discussion is complicated by the fact that the “alien” in question is human, “ancient and modern, an indigenous woman and becoming a Black Conch creole.” Is she a fish that belongs to whoever captured her? Or a human, belonging to no one, not even to David who wants to possess her through marriage?

Another fact which sets The Mermaid of Black Conch apart from the previously mentioned sci-fi tropes is that Aycayia returns to life on the land to face the reality of genocide. Her people, and their “scared connection to birds and fish, moons and stars” are gone and her “red skin” is an anomaly. She is of the original people, yet foreign, an outsider.

The Mermaid of Black Conch portrays loneliness, beautifully-flawed relationships, longing, jealousy, and greed, wrapped in a captivating story with acute imagery and compelling characters. It leaves much for us to consider about the origin of our own humanity.