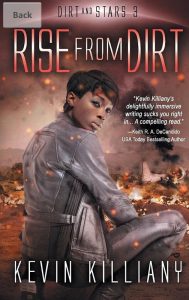 In this, the third book in the science-fiction YA Dirt and Stars series, we find the continued adventures of Mara, Jael, and Beth along with a new and increasingly diverse cast of young people.

Mara is a “spacer” born on a man-made space station, who came down to Earth in a previous book prepared to endure six weeks of exile on the disease-ridden, war-torn wasteland that spacers call dirt. Instead she makes friends, most surprisingly with Jael, an “earther” of African-American descent.

Disclaimer: I am virtual friends with the author and I was one of several readers of an earlier version of the novel as Kevin was kind enough to acknowledge in the book. That said, I really enjoyed both readings of Rise from Dirt.

As described in my review of Book One, the backdrop to the Dirt to Stars series is an alternate version of history. The Second World War lasted longer and resolved in a manner that had severe consequences. The civil war got a very late start and although this book is set in 2021, people of colour are still fighting for equality. As a result, when it looks as if Jael might be successful in her application to enter the space program, the political fallout catapults the girls into complex and dangerous situations.

As with the other books in the series, the world building is outstanding. The description of life on the space station, of the flight simulators, equipment, etc are presented in painstaking and realistic details which will enthrall any science fiction aficionado. But it is the characters who will really reel readers in. At its heart Rise to Dirt is about differences colliding. Two worlds having to interact, the worlds of Tombaugh and earth and even within those, different races, different sexual identities, different backgrounds. The characters handle these differences in their own ways because of who they are at heart and because of their history.

The story is told from multiple view points, each distinct and very true to character. Beth is easy-going, emotional, open, and often hilarious. Mara is initially rigid in her speech but her entries become more nuanced as she becomes attached to her earth friends and comes to terms with her altered future. Jael appears to move in the opposite direction, becoming increasingly precise in her language and general deportment as she progresses through the space program. My hands-down favourite character in this book is Fatima who is brilliantly portrayed. Fatima appears to be on the autism spectrum and has great difficulty deciphering emotions, both her own and that of others. Killany does an excellent job of speaking from inside Fatima’s head in an intelligent way that appears realistic and makes her a particularly endearing character.

You don’t have to read books one and two to understand book three. Rise from Dirt stands on its own, but I do recommend checking out those books as well so you feel the full impact of the journey from Dirt to Stars.