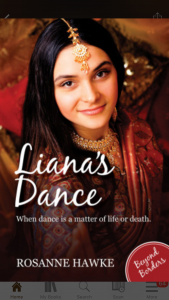 Sixteen-year-old Liana is a student at a boarding school in northern Pakistan when religious extremists attack and capture several students. She manages to escape and then, along with one of her teachers, she executes a dangerous plan to rescue her classmates.

I got my copy of Liana’s Dance on NetGalley and gave it three stars.

Liana’s Dance gets off to a slow start that may not adequately foreshadow the seriousness of the events which take place later in the book. Liana is suffering from depression and having difficulty dealing with her fears and nightmares about the mounting dangers in their home. The book really begins when the school is attacked and from that point onwards the author engages the reader in an action-filled, no holds-barred journey into a world in which being mistaken for an American or a woman could mean death. The book has many layers and will leave readers with much to think about.

I don’t know enough about Pakistan per se to judge if the setting was realistically presented but the scenes in the village and Market were effectively described and certainly felt as if they could be authentic. The depiction of the life style for women also appeared accurate and the author managed to present a fairly balanced view of the state of affairs and the motives of the locals in the story.

Despite the fact that characters close to the protagonist suffer and die, the story still wraps up very neatly, a little too neatly, The romantic angst between Liana and her teacher may have been introduced to throw readers off of the scent of his true identity but it was unsettling.