I received a free e-copy of this book in return for my honest review. 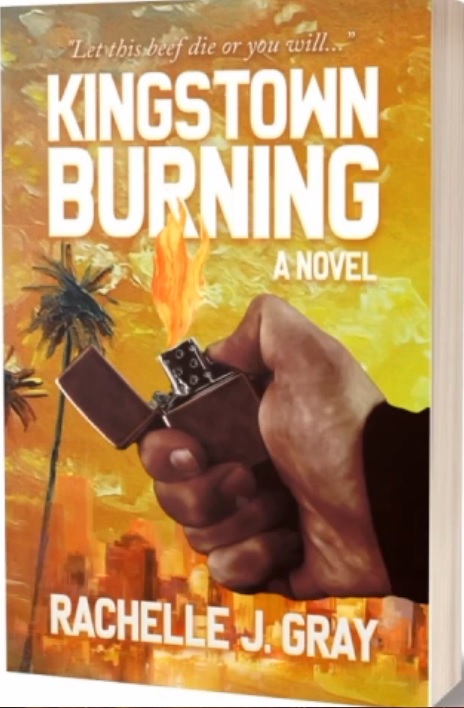 Kingstown Burning is a debut novel by Rachelle J. Gray. The book is a work of fiction with speculative elements set in Barbados. It takes readers inside the world of a group of friends who are also Rastafarians and dips at times deeply into the culture of that religion. This positions it as potentially important work in a time when we are becoming aware of the need for authentic exploration of underrepresented communities. Unfortunately, while there are numerous merits in the writing and the character development, the book does not deliver in terms of the overall story.

Kingstown Burning includes three friends, Marley, Nubya (Judah’s wife), and I-Am. Part I of the book is spent on Marley’s life, her friendships, and the way that she straddles two worlds–the upper-class society into which she is born and the close and compelling friendship she holds with her friend group who are not a part of her financial class. The group has big plans for positioning themselves to emerge as strong players in the marijuana market when the inevitable relaxing of laws comes into effect. I am unfamiliar with details of the growth and use of marijuana so I would have loved some more context clues to help me understand what some of the terminology meant but this was a relatively minor issue. There is a thorough glossary of terms at the end but I did not realise this until I had completed the book.

Part II tells the story of Judah, how his acceptance of Rastafarianism saves him from what was likely to be a self-destructive path. This section does the most in the book to showcase Gray as a talented writer. Her scene work is admirable and makes for a sense-stimulating read. There is a scene where Judah is on a boat and, under Gray’s guidance, readers will be submerged in the motion of the boat, the fear, and the white sand on which he lands. This section of the book and the scenes which followed felt like where Gray really hit her stride. Unfortunately, this is in Part II of the book, about 40% of the way in.

Judah’s rescue-physical and mental-by the Rastafarians makes for a compelling story but when he has his first encounter with a Rastafarian Church, there is a didactic interlude which reads like a sermon from the author and does not contribute to the plot. The characters do good work portraying the tenets of Rastafarianism and are the most compelling vehicle for a sermon. Judah’s time in the Church was one area of the book where I would have enjoyed spending just a bit more time to better understand Judah’s experiences there and his decision to eventually move on. There is a lot that is alluded to but not developed enough for the reader to understand. For example, Gray writes about the impending rift between Judah and his friend Gideon: “Unbeknownst to Gideon, he had summoned Judah’s temper with one of his out-of-place comments…” I longed to see this played out in scene. Judah’s story is interesting and I connected with him as a character so, this lack of detail was frustrating.

Gray showcases an extensive vocabulary in her writing, which is admirable, but at times, the language is unnecessarily complex and obscures rather than clarifies the ideas. Her overuse of speech tags is also a bit distracting, but generally the writing is enjoyable. Gray also writes good dialogue, which reads as realistic. The gentle banter among the friends does a lot to give readers a sense of their relationships.

The characters in Kingstown Burning are well-developed. Gray clearly has a deep connection to each one of them and it shows. I was immediately drawn in by Marley, for example. The characters are complex and flawed, and therefore human–realistic. They have secrets, make bad decisions, but the central characters are loyal and stand up for one another. This is conveyed effectively through their behavior and dialogue.

Unfortunately, the characters do not have a cohesive connection to the plot. There are characters who appear in Marley’s segments of the story who simply disappear into the background, most notably, Duti, who ended up seeming like a red herring. Others, like Lee Mile could be given an even larger role. I suspect readers will crave to know more about him and his past with Marley. At times the story seemed disjointed and at the start of a chapter I would be momentarily unsure of how much time had passed since the previous scene.

In a real way, Kingstown Burning reads like two books with Marley as the link between them. This was actually my inclination when I first read the book description, that it felt like more than one story. The book is presented as being in Parts, however, Part III does not do the work it needs to do to link Parts I and II together.

In my introduction of the book I mentioned that it was speculative fiction. The supernatural/mystical elements of the book don’t make an appearance in the story until Part II, about 40-50% of the way in, which is not an issue in and of itself. The introduction of this element is well-done, matter-of-factly, in a way that will startle the reader but at the same time, encourage the reader to just go along with it. However, the lead may be too deeply buried and may discourage readers who did not sign up for speculative fiction.

So, the characters are compelling, scenes are well-developed, and the writing is commendable, but where this book fails is in the plot. It is clear that Gray is most concerned with her characters, but the book is not set up as purely literary fiction, and readers will be grasping for a stronger through-line of the story. With some reorganization, contraction, and expansion, this could have been a significant force in Caribbean speculative and literary fiction.