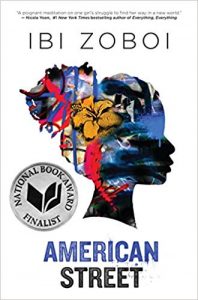 Sixteen-year-old Fabiola and her mother are separated at US Immigration when they enter the US traveling from Haiti to Detroit. Fabiola is an American citizen and her mother has a valid visa, however, Immigration agents refuse her mother entry and Fabiola, who has not been to the US since leaving as an infant, must travel from New Jersey to Detroit to meet her aunt and cousins, Chantal, Donna, and Princess.

The gritty and dangerous neighborhood where her aunt lives (on the corner of Joy Road and American Street) is at odds with Fabiola’s vision of life in the US. She is surprised by parallels she sees between life on Detroit streets and her life in Haiti and the differences she sees especially in the lack of community. She thinks “If there was a place like this back in Haiti, everyone would come out and gather on the sidewalk to exchange meals and gossip. No one would be left alone in a tiny house with only their regrets and sorrows to keep them company.”

American Street is a novel about family, immigration, survival, and home. Fabiola is quickly absorbed into her cousins’ lives and they develop a very believable relationship as strong as the strongest fabric. She also develops a complicated love relationship with Kassim, an ambitious young man who has dreams and a plan to escape his life in the city. Fabiola seems caught between two worlds, the streets of her new neighborhood and the pull of Haiti, made stronger by the absence of her mother and the practice of her  spirituality through the voodoon religion. When she is offered an opportunity to secure her mother’s release, her loyalties are tested and she makes difficult decisions with dire consequences.

The characters came alive on the page as individuals and I was invested in Fabiola’s survival and her reunion with her mother. Fabiola is an endearing character, working to stay true to her own moral code. Her cousins and her love interest, Kassim, are terribly flawed yet, loveable each in their own right, especially because of their fierce loyalty to family. The family’s story felt familiar, one family member settled in the US and struggling to send money home to support the others while painting an inaccurately positive picture of their lives in America. It is a story that needs to be shared widely, as it underlines the fact that there is no single reason that people migrate, no one path to acceptance in a new place, no single story.

The novel takes an unexpectedly dark turn near the end and I must confess to having been a bit baffled by the conclusion, however, overall I enjoyed this portrayal of an immigrant’s journey.

American Street is a YA novel for older teens. It is necessarily peppered with profanity and violence. Necessarily, because, although I have never been to this part of Detroit, I imagine that it would be unrealistic if these characters, with their particular backgrounds and upbringing spoke any differently.